Carnival season has come to Aruba with the Fakkel Optocht (Torch Parade) held this past Saturday evening, January 8. One of the most popular events of carnival heralding weeks of reveling and excitement, the parade made its way through Oranjestad and down the L.G. Smith Boulevard beginning at the Valero station on the west end, to finish at Banco di Caribe on the Vondellaan.


This first parade has a casual ebullience as participants declare their group affiliation with colorful tee shirts and elaborate millinery. More and more, modern technology is being deployed by creative groups, resulting in large portable LED displays being used to bring some punch to their presentations.

Majestic Group sported flashing tee shirt designs and a sea of pirate and jester hats lit the night. Glow cups and flashing beakers were brandished by marchers, ready to be filled with copious amounts of beer.

Noted Carnival musician Claudius Phillips and his group OPC celebrated their fifth anniversary with a fantastic and artistic electronic display. In all likelihood, this was a preview of the innovations that can be expected of the annual Lighting Parade. 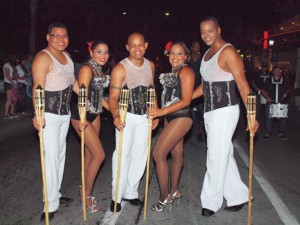 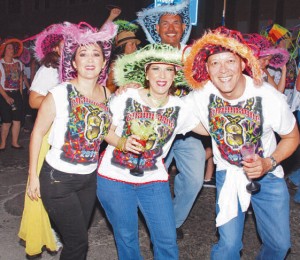 Thousands participated in this first parade, with Digicel, principal sponsor, leading the way with the first and only float of the Torch Parade along with Aruba’s special athletes.


The streets were lined with islanders and island visitors who were quickly swept up in the spirit of Carnival 57, the ultimate celebration of island culture.

Story courtesy of The Morning News
at January 15, 2011