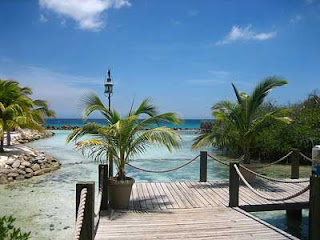 Aruba is a Caribbean island 15 miles north of the coast of Venezuela. With an area of approximately 70 sq. miles (184 sq. km) this flat, riverless island is renowned for its white sand beaches.Because of its location south in the Caribbean there is very strong sun, but a light breeze keeps the temperature pleasant and almost constant at about 27°C (81°F).
From the tourist point of view, Aruba can be considered to be divided into the southeast and northwest coasts. The southeast has the white sand beaches, turquoise seas, and warm waters. The northwest coast, exposed to the Atlantic, has a few white sand beaches, rough seas with treacherous currents and rocky coastline.
With beautiful weather all year round and turquoise Caribbean waters the best thing to do in Aruba is to enjoy the sunshine on one of the many beaches:
Baby Beach - Southern Tip of the island. It’s called Baby Beach because it is no more than five feet deep at any point - like a giant wading pool. This beach also has some of the best snorkeling on the island.
Eagle Beach - Often called “1 of the 10 best beaches in the world”
Hadikurari Beach (a.k.a Fisherman’s Huts) - This is where the High Winds Pro AM windsurfing world championship is held every June.
Palm Beach - White sand and excellent swimming conditions in calm water. Nearby hotels allow you to use public areas for changing. Accessible by bus, car or taxi.
Malmok Beach - Shallow water and lots of fish make this another good choice for snorkeling. There are no nearby facilities. The place is accessible by car or public bus.
Another tourist attractions in Aruba are:Natural Pool (Conchi) - This is a small pool of water hidden in natural rock formation that jut into the ocean, just off the shore of Aruba. Located on the northern side of the island and only accessible via ATV or Trail Rated 4×4 this place is great for a day trip.
California Lighthouse - Many scenic views and also the location were you can access the dirt trails to travel down the northern shores of Aruba.
Aruba Aloe Factory. You can take a short tour and learn some interesting facts about aloe farming, production and uses.
Casibari Rock & Ayo Rock Formations,"You can climb and explore these formations, the tops of which provide a great view of the countryside.â€¢ Natural Bridge at Boca Andicuri.
There are 7 “Natural Bridges” in Aruba. The original (biggest and most famous bridge that people are referring to when they say Natural Bridge) collapsed in 2005 leaving a pile of rubble in the bay.
Bushiribban Gold Mill / Smelting Station. The ruins of the smelting station are the way to the Natural Bridge. Climbing the ruins you can get great photos of the coastline.
Aruba Ostrich Farm. The tour walks you around the ostrich pens and incubator. The Aruba farm is more for educating people, while the meat that is used for food in Aruba actually comes from the sister island of Curacao. (Ostrich is a red meat, which is high in protein and low in fat.)Arikok National Park - Approximately 20 percent of the island is comprised in this national park, an area of unique scenic beauty. Here are also located the Tunnel of Love and Guadirikiri. Hooiberg (Haystack Mountain) a.k.a simply “the Haystack” Standing over 500 feet, the haystack is in the center of the country and provides a breathtaking view of Aruba. People suggest going on a cool and clear day because it will be easier to climb the 1000+ steps required to reach the top and you can see the coast of Venezuela to the south!
Renaissance Island - A private island accessible by ferry only if you stay at the Renaissance Resort and Casino. The island is divided into 2 beaches: Iguana Beach and Flamingo Beach. The Iguanas are fed on the dockside by Iguana Beach while the Flamingoes congregate on the other beach.
De Palm Island - A private island where you can snorkel in an underwater paradise, surrounded by coral formations and colorful fish.
Boca Catalina and the Antilla Shipwreck - These are 2 of the many sites snorkel tours will take you. The Antillla Shipwreck is the remains of a scuttled 400-foot German cargo ship that was anchored off of Aruba during WW2. It was thought that this ship was supplying German U-Boats in the Caribbean and after Holland was invaded in 1940, the captain was given notice to surrender the ship. Instead of surrendering the ship to the Dutch Marines the captain sunk the ship by blowing up the boilers. (The crew swam to shore, and were taken POW and shipped to Curacao.) The joke you will hear is “They did not want to surrender the cargo and they also wanted to provide future tourists with a site to see.” The remains are off of Malmok beach.
Butterfly Farm - A tropical garden teeming with butterflies from around the globe.
Bubali Bird Sanctuary - The home to more than 80 species of local and migratory birds.
Our Lady of Alto Visto Chapel
at June 13, 2009