Aruba the rising star of the Caribbean 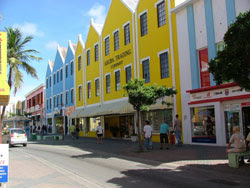 Measuring less than 20 miles by six at its widest point, it’s been popular with American tourists for decades, but is only now really opening up to the British thanks to First Choice and Thomson with direct flights from Birmingham and Manchester.

It is, however, one of those spots which having visited once people return to time and time again. The island is blessed with beaches of pure white sand lapped by crystal clear turquoise coloured water and has an average temperature of of 82 degrees.
It’s guaranteed sunshine all the way, although you will get some short, sharp showers.
Aruba boasts full employment so crime is virtually non existent – a real plus point for tourists.
Take two weeks at one of either of the two all-inclusive Divi resorts and you will be so relaxed at the end of it you will be hard pressed to remember what day of the week it is.
Both resorts are low rise, beach front properties separated by an expanse of snow white sand. And because they are sister resorts the facilities in each are open to guests of both properties, so you can eat in either.
Facilities like the superb gym – looking out over the ocean, a water sports centre and even a huge rock climbing tower.

Rooms at the Tamarijn face the ocean so that when you open your patio doors you step off your own private patio directly onto the sand.
The size of Aruba makes it easy to explore but to be frank there is not a lot of sight seeing to do. And in a perverse sort of way that makes it more relaxing because you don’t have to be rushing off every minute to ensure that you see everything. If you wanted to you could do it all in a couple of days.
For years one of the most visited sites was the natural bridge, a spectacular rock formation linking two bits of coastline. This collapsed in 2002 leaving the Arubians to switch to promoting its nearby but smaller and less spectacular sibling, the Baby Bridge.
The Californian lighthouse on the north of the island – named after a ship which sank close by – is well worth a visit. The high point it’s built on gives a panoramic view of the coastline as well as giving you the chance to see the most expensive residential part of the island, known as the Beverly Hills of Aruba.
Aruba is an island built on coral, and large areas are have cacti growing on them. In fact in some of the poorer districts where people can’t afford fencing you can see they have planted cacti to form natural boundaries around their property and as I drove around I couldn’t help thinking that some of the cacti growths were so spectacular they wouldn’t have looked out of place in a western.
At the opposite end of the island there is Baby Beach – another white sanded shoreline which boasts some of the clearest waters and most colourful fish, ideal for snorkellers. At one time Aruba was home to the biggest oil refinery in the world – the Exon refinery – and the beach was only for use by the company’s workforce. Today there is a much smaller refinery on the site and the beach is now open to all.
The reduction in the size of the refinery means the island is now totally dependent on tourism and while Dutch is the official language all Arubians learn several tongues at school, including English so there are no language barriers.
Their own colourful language – Papiamento – is made up of nine different ones and is a fascinating lilt to listen to.
Some 120,000 people live on Aruba and 80 per cent are Roman Catholic. The official currency is the florin but in effect the dollar is most widely used by tourists.
The capital of the island is Oranjestad, a little waterfront town with some of its older buildings in pretty pastel shades. From the Inuted Kingdom, book your travel online at www.thomson.co.uk/aruba