Hanging out in Aruba's underwater café 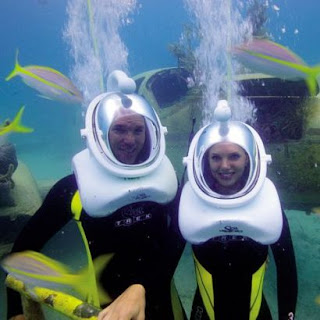 Hanging out at an underwater café, some 20 feet under the Caribbean Sea, a cheeky little yellow and black fish nips my bottom.
Welcome to Aruba or Bon Bini as the locals say! I had always wanted to travel to the Caribbean - but as a fair-skinned redhead the prospect was challenging, and the idea of a week sitting in the shade just didn’t do it for me. I wanted to find somewhere to explore and have an adventure.
So, when the brochure described Aruba as an adventure playground with year-round sunshine, cooling trade winds, vibrant nightlife, and new direct flights from Gatwick (England) thrown into the bargain, I could not resist a week away to this small and friendly island paradise.

Aruba, I later discovered, lies just off the coast of Venezuela, and is the 'A' in the ABC islands – its counterparts being Bonaire and Curacao. As a former colony of The Netherlands, Aruba still has a strong Dutch influence visible in the colourful colonial architecture in Oranjestad, the island’s capital. Although the official language is Dutch, nearly everyone on the island speaks English, so no worries there, as well as the local tongue Papiamento. This is a lilting mix of a number of other languages - including Spanish, Dutch, Portuguese, English and French with a sprinkling of Arawak – and it’s utterly baffling.
With nine miles of beautiful white sand beaches and turquoise seas, the island is picture perfect and a haven for sun-worshippers, but with freckles and factor 30 for company, I was more interested to find out what else this Dutch Caribbean island had to offer. Watersports are a-plenty in Aruba, from kitesurfing and windsurfing, to snorkelling and scuba diving - and even a curious combination of both in the form of Snuba.

As a non-diver, however, it was Seatrek, which seemed the best way to explore Aruba’s magical underwater world and I was mesmerised. Huge blue parrott fish, and what seems like a rainbow of marine life surrounded us during our rather unusual walk along the seabed. Wearing a helmet pumping oxygen to help you breathe, and prevent you from floating back to the surface, my trek is anything but graceful. Instead we looked more like budding astronauts bouncing on the moon as passed submerged aircraft in this make-believe underwater park.

For my next adventure we set sail along the coastline to find the Caribbean’s largest shipwreck for a spot of snorkelling. And we found it: the 400ft long Antilla, a German freighter, which was sunk in 1940 when the Germans invaded Holland during World War II. The wreck sits in shallow water, so even beginner snorkellers can get a good feeling of its huge forbidding bulk. Our boat Mi Dushi seemed a little incongruous with our tropical surroundings. Built in Sweden in 1925 of oak and mahogany, it was apparently one of the last great authentic sailing ships still operating in the Caribbean. Whatever its origins, on deck a party was starting, with one song which was to become the anthem of the holiday – the Beach Boys’ Kokomo blasting on the speakers. "Aruba, Jamaica ooo I wanna take you, Bermuda, Bahama come on pretty mama…"

Back on dry land, the pristine beaches of the south coast, where all the island’s hotels are situated, contrast dramatically with the island’s arid, desert-like interior. Cacti and huge rock formations make up the rugged northern coastline, which is best explored on an off-road adventure. I opted for a jeep safari with local operator De Palm Tours, but horse-riders and thrill seekers on ATVs roared past us as our group stopped at some of the island’s most interesting sights, the California Lighthouse, the lonely but charming Alto Vista chapel, and the ruins of a former gold mine, Bushiribana.

Although we stayed at the one of the island’s few all-inclusive resorts, a great tip for holidaymakers looking to save money, we could have dined out on different style of cuisine every night, as the island caters for every appetite and budget. A little local restaurant, Papiamento came highly recommended. Housed in a fully restored authentic 19th Century Aruban house, you can dine inside the elegantly furnished rooms or outside around the pool surrounded by enchanting fairy lights and exotic plants. I tried a Caribbean casserole of fish, shrimp and scallops served in a lobster cognac sauce followed by the owner’s speciality, Eduardo's Seafood Pot, to share - a handmade clay pot filled with locally caught seafood and herbs. The fusion of Dutch, Latin and Caribbean culture on the island have combined to create a spicy and sizzling nightlife.

So after an exhausting but exhilarating week I headed out to meet Reggie and Sabine, founders of dance school Aruba Salsa to learn some steps. Aruba’s islanders never need an excuse to party and their infectious enthusiasm for fun ensures a good night out. The salsa club I found myself shaking my hips at, Mambo Jambo, is just one of the island’s many nightspots. After a few local Ariba Aruba cocktails to pluck courage, and that Beach Boys song playing for the one-hundredth-zillionth time, I was partying like the best of them. Written by Claire Horwood from the United Kingdom.
at March 31, 2009

I want not concur on it. I over warm-hearted post. Particularly the title attracted me to read the whole story.

Amiable post and this fill someone in on helped me alot in my college assignement. Gratefulness you for your information.

Great write-up and well described context. I am just roaming around the Gatwick hotelsand waiting when I will get my flight to Aruba. Will surely visit the Underwater cafe there.

Nice pictures of the underwater cafe! I live it. Hey David where are you in Gatwick hotels?

I liked it. So much useful material. I read with great interest.

Hey this is a actual cool web site

Feel free to surf to my homepage trying to conceive tips

Hello Everybody,
My name is Mrs Sharon Sim. I live in Singapore and i am a happy woman today? and i told my self that any lender that rescue my family from our poor situation, i will refer any person that is looking for loan to him, he gave me happiness to me and my family, i was in need of a loan of S$250,000.00 to start my life all over as i am a single mother with 3 kids I met this honest and GOD fearing man loan lender that help me with a loan of S$250,000.00 SG. Dollar, he is a GOD fearing man, if you are in need of loan and you will pay back the loan please contact him tell him that is Mrs Sharon, that refer you to him. contact Dr Purva Pius,via email:(urgentloan22@gmail.com) Thank you.