The Cas di Glas event/ One island, one voice
The Cas di Glas (House of Glass / Het Glazen Huis) event is a fun fundraising, which takes place from December 12th to December 16th, 2012. This years theme is “Danki na nos Grandinan” and its goal is to raise money for the Wit Gele Kruis.
Situated in front of Taste of Belgium restaurant, a glass house will be the focal point around which activities, music and performances are scheduled.
Inside the house, 3 deejays are going to do their utmost to get the entire population of Aruba and its visitors involved in a united effort to raise money. 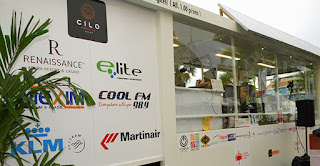